Does a study say vaccinated people are more likely to become infected with COVID-19 than those who don't get the shot? No, that's not true: One of the study's co-authors says the writer of an article about their work got it wrong. "Interpretation that our research is evidence of anything but a protective vaccine effect is misrepresentation," said Dr. Palle Valentiner-Branth, head of the vaccine preventable diseases group at Statens Serum Institute in Denmark.

The claim appeared in an article (archived here) published by the Rogue View website on December 23, 2021, under the title "Yale Study: Vaccinated People MORE LIKELY to Be Infected Than Those Without Jab (FULL DETAILS)." It opens:

A new pre-printed (non-peer-reviewed) study on vaccine efficacy suggests that vaccinations are effective against SARS-CoV-2 variants... until they aren't. The study, published in Yale-owned medical journal medRxiv, was conducted by the following scientists: 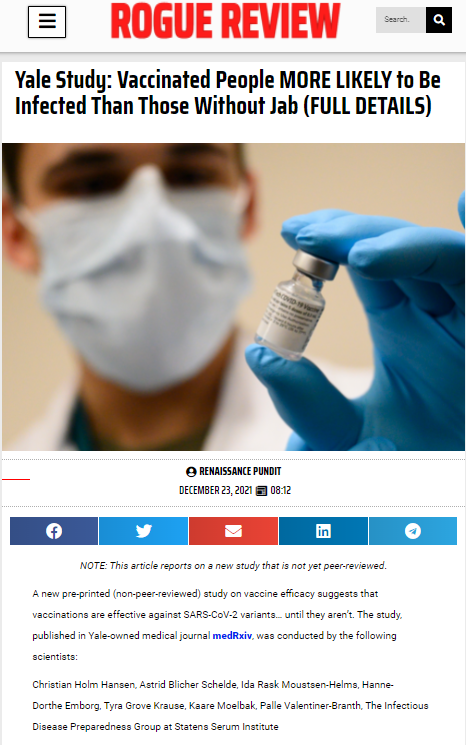 Not a Yale study

The headline of the article in Rogue Review begins with a falsehood before making its claim that vaccinated people are more likely to become infected than those who don't get the COVID shot.

The study is not from Yale University but was produced by researchers at the Statens Serum Institute in Copenhagen, Denmark. It appeared on a preprint server for health sciences called medRxiv, which was founded by Cold Spring Harbor Laboratory (CSHL), Yale University and BMJ. The server is owned and operated by CSHL. The study comes with this warning:

This article is a preprint and has not been peer-reviewed [what does this mean?]. It reports new medical research that has yet to be evaluated and so should not be used to guide clinical practice.

The study, with that description included, has not yet been subjected to professional peer review. That's the customary process through which the methodology and conclusions in draft scholarly writings like this are challenged by professional peers, sometimes causing authors to restate their findings.

The Danish study, published December 23, 2021, looks into the effectiveness of the Pfizer (BNT162b2) and Moderna (mRNA-1273) vaccines against the delta and omicron variants. The Rogue Review article says the study buries the biggest news, before claiming vaccinated people are more likely to become infected than those who haven't gotten the COVID shots, especially with omicron:

The abstract does not do a great job of explaining the most newsworthy findings, however. Deeper into the study, you can see that the scientists found that unvaccinated folks are actually 76.5% LESS likely to contract SARS-CoV-2 than those with a jab from the company [Pfizer'.

Moderna vaccine effectiveness also provides relatively shoddy defense from the virus and its strains. Moderna customers are 39.3% more likely to contract the virus than unvaccinated people.

The figures in the study do show an expected waning of vaccine efficacy (VE), especially after three months with the omicron and delta variants. That's where the negative numbers in the red box in the table below come from:

(Source: Vaccine effectiveness against SARS-CoV-2 infection with the Omicron or Delta variants following a two-dose or booster BNT162b2 or mRNA-1273 vaccination series: A Danish cohort study)

In a December 29, 2021, email to Lead Stories, Valentiner-Branth said their results were distorted in the Rogue Review article:

Interpretation that our research is evidence of anything but a protective vaccine effect is misrepresentative.

Rather than saying the vaccinated are more likely to become infected with COVID, Valentiner-Branth said the study shows the need for boosters against the new variant:

This study looks at infection regardless of whether one has symptoms or not. The main reason for getting vaccinated is the protection against severe disease (e.g. hospitalisation) and death. Because this is an early study this protection could not yet be assessed but it is considered likely that vaccination will also protect against hospitalisation.

Our study contributes to emerging evidence that BNT162b2 or mRNA-1273 primary vaccine protection against Omicron decreases quickly over time with booster vaccination offering a significant increase in protection. In light of the exponential rise in Omicron cases, these findings highlight the need for massive rollout of vaccinations and booster vaccinations.

The omicron variant was first reported to the World Health Organization from South Africa on November 24, 2021, so public health officials still have a lot to learn about it at the time of this writing and relatively little data. The negative VE numbers the Rogue Review article cites to justify its claim that the vaccines put the vaccinated at greater risk to get COVID than the unvaccinated can be explained, Valentiner-Branth said:

(2) Denmark was very quick to conduct sequencing and to identify the first generations of Omicron cases in the country. Cases during this period occurred to an exaggerated extent in those who were travelling internationally, and those in the social and professional circles of travellers, and were largely vaccinated. We expect therefore that there was an overrepresentation of vaccinated people among the first generations of Omicron cases identified in Denmark, not because the vaccines weren't protective, but because the variant hadn't spread far enough into the general population, including into the unvaccinated population, to make for comparable infection rates.

On that basis it is reasonable to expect that the vaccine effectiveness estimates presented in our study are too low, not only for the fourth period (91-150 days after vaccination) but likely also for the earlier time intervals.

To conclude, the vaccines' protective effect may be low against infection with Omicron after 4 months, but it is most unlikely to be negative!