Was Sean Madison, a scuba diver aged 22, hospitalized in Hawaii after inserting his manhood into a giant clam during a dive? You may have read an online report about that but it never happened, the whole thing was made up by a satire website so it is not true.

The original story was published on March 22, 2018 with the headline "Hawaii: Scuba diver hospitalized after his penis gets stuck in giant clam" (archived here) and opened:

Pahala, HI | A scuba diver is being hospitalized at Ka'u hospital on the island of Hawaii after he inserted his penis into a giant clam while recreational diving.
Sean Madison, 22, was transported to Ka'u hospital after suffering from severe breathing complications, vomiting, extreme swelling and low blood pressure.

Doctors believe physical contact with the giant mollusk may have triggered his allergy to seafood and exposed him to high levels of arsenic.

Madison, 22, whose condition has stabilized, said he inserted his penis inside the clam as a prank to impress his friend, Thomas Meyer. 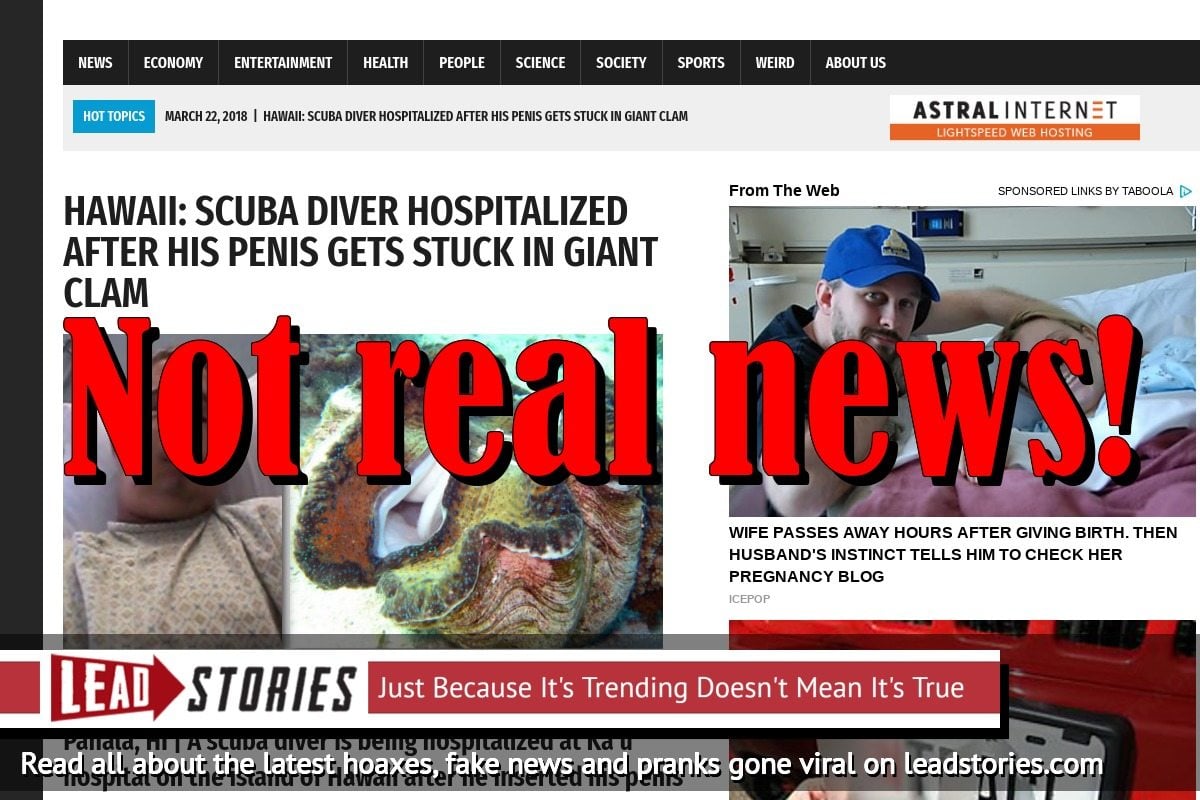 For once the real story behind the picture is even more bizarre than the fake article: it shows 18-year-old Austin Hatfield, a Florida man who got bitten in the face by his pet snake when he tried to kiss it.

As usual, the post from World News Daily Report looked quite convincingly real on social media:

Hawaii: Scuba diver hospitalized after his penis gets stuck in giant clam

Pahala, HI | A scuba diver is being hospitalized at Ka'u hospital on the island of Hawaii after he inserted his penis into a giant clam while recreational diving. Sean Madison, 22, was transported to Ka'u hospital after suffering from severe breathing complications, vomiting, extreme swelling and l

But the website World News Daily Report is a well known satire website specialized in posting hoaxes and made up stories. The disclaimer on their website is pretty clear about that even though you have to scroll all the way down the page to find it:

World News Daily Report assumes all responsibility for the satirical nature of its articles and for the fictional nature of their content. All characters appearing in the articles in this website - even those based on real people - are entirely fictional and any resemblance between them and any person, living, dead or undead, is purely a miracle.

It is run by Janick Murray-Hall and Olivier Legault, who also run the satirical Journal de Mourréal, a satirical site spoofing the (real) Journal de Montéal. Very often their stories feature an image showing a random crazy mugshot found in a mugshot gallery on the internet or on a stock photo website superimposed over a background of flashing police lights or crime scene tape.

Articles from the site are frequently copied (sometimes even months or years later) by varous fake news websites that omit the satire disclaimer and present the information as real.

: The story has now been copied by 8shit.net too.