Did a woman high on meth die after pumping gasoline into her anus? No, that's not true: the story was made up by a fake news website pretending to be CBS News that is part of a network of sites recycling the same false stories over and over again but with names and locations changed. The story is not real.

The story originated from an article published by "CBS News 10" on October 12, 2018 titled "Erie, Pennsylvania: Woman high on meth dies after pumping gasoline into her anus" (archived here) which opened:

A 32-year old Erie, Pennsylvania woman has been killed after an overdose on meth caused her to insert a gas pump nozzle into her anus and begin pumping gasoline.

The woman, who is yet to be formally identified by authorities, is believed to have a record for multiple drug offences in Pennsylvania. Officials who are involved in the investigation believe the latest incident was caused by the woman overdosing on meth.

"The victim has been known to abuse multiple substances, but her drug of choice is meth," said one investigator. According to witnesses, the woman ran across several lanes of traffic to the gas station and grabbed a pump nozzle before pulling down her skirt. 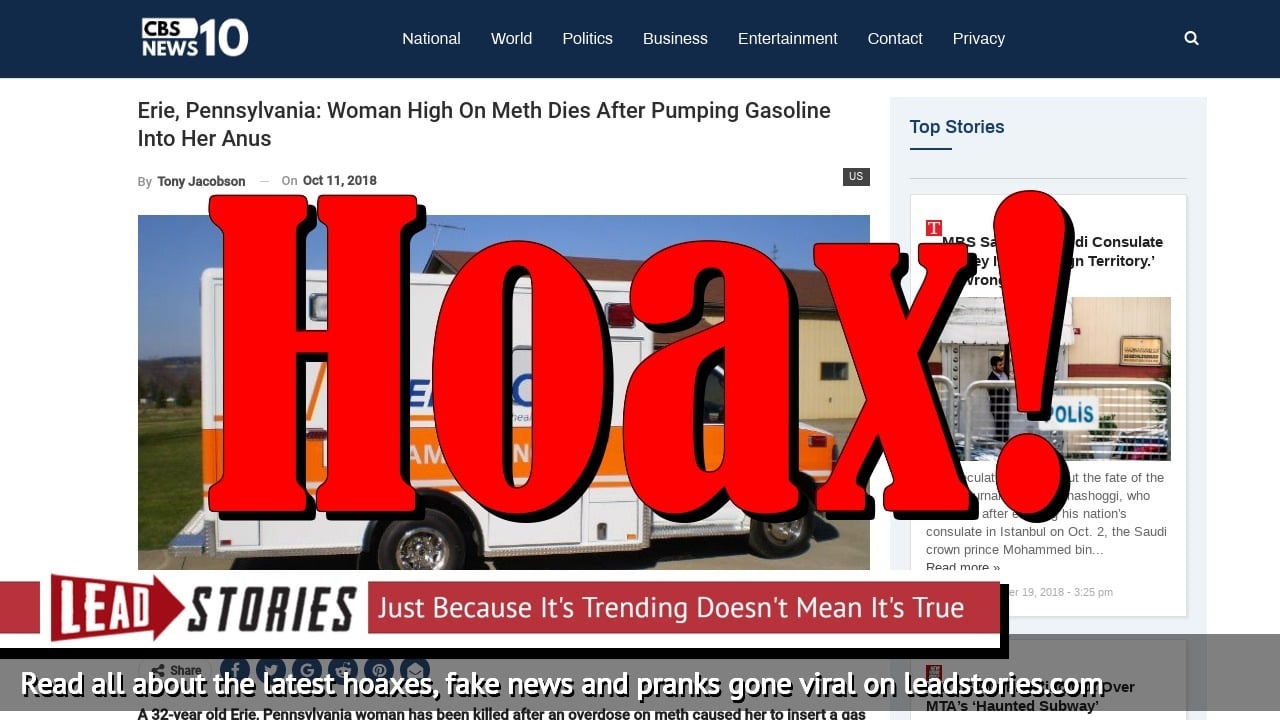 Users on social media only saw this title, description and thumbnail and might have confused it with the real CBS News:

Erie, Pennsylvania: Woman high on meth dies after pumping gasoline into her anus

A 32-year old Erie, Pennsylvania woman has been killed after an overdose on meth caused her to insert a gas pump nozzle into her anus and begin pumping gasoline. The woman, who is yet to be formally identified by authorities, is believed to have a record for multiple drug offences in Pennsylvania. Officials who are involved ...

NewsGuard, a company that uses trained journalist to rank the reliability of websites, describes cbsnews10.com as:

A website that falsely purports to be associated with a CBS-affiliated television station and that publishes false stories, including a made-up article about a woman who "deep fried" her "cheating husband" that spread on social media.

We wrote about cbsnews10.com before, only a few days ago they did another hoax involving someone's anus:

That hoax went viral enough for local media to take an interest:

The story of a woman in Iowa City who detonated explosives in her cheating husband's anus after she found out he was cheating is fake news. Shared on a recently purchased domain, CBS News 10, on Oct. 11, the story received about 9,000 interactions on Facebook, according to fake news hunter Maarten Schenk.

The website domain name cbsnews10.com was only registered on October 5, 2018 according to WHOIS data and it is hosted on the same IP address (172.64.174.2) as usatoday-go.com, a now defunct fake news website that ran at least one big hoax about a month and a half ago:

STORY UPDATED: check for updates below. Is a man from Knoxville, Tennessee suspected of creating a "real-life human centipede" and is he now on the run? No, that's not true: a two year old hoax has been cut up and stitched together again, changing the location, but otherwise the story still is not real.

The usatoday-go.com site was part of a larger network of sites that ran the same hoaxes over and over again but with names and locations changed. We suspect the cbsnews10.com site is part of the same network although we haven't seen the gaoline in anus story before (but we suspect it will soon be turning up on other sites with the location changed).

We were unable to locate any news reports from reliable outlets about gasoline-in-anus deaths in Erie, Pennsylvania so it is pretty safe to say this story is not real.