Did a 23-year-old woman named Brittany Washington die after trying to smoke meth through her anus via a glass pipe? No, that's not true: the story was made up by a site that published several copies of the story in a row, all set in different towns. And the picture of the woman used to illustrate the story actually came from a 2014 story about the arrest of a former beauty queen on meth charges.

The story originated from an article published by The Daily Star on May 13, 2019 titled "Frankfort, IN: Woman dies from overdose after trying to 'smoke meth through her anus'" (archived here) which opened:

A 23-year old Frankfort, Indiana woman who officials say tried to 'smoke meth through her anus' has died from an overdose of the drug.

Brittany Washington died from a massive overdose after her unusual attempt to smoke meth by placing a glass pipe into her anus caused her to absorb far more of the drug than would have been absorbed through normal methods.

"The anus is far more sensitive and much closer to internal organs, so whenever a drug user tries to take a substance anally there is a much higher risk of overdose,' warned one drug expert. "In this case, she didn't realize how much meth she was absorbing until it was too late."

Frankfort, IN: Woman dies from overdose after trying to 'smoke meth through her anus'

A 23-year old Frankfort, Indiana woman who officials say tried to 'smoke meth through her anus' has died from an overdose of the drug.Brittany Washington died from a massive overdose after her unusual attempt to smoke meth by placing a glass pipe int

However the woman pictured with the story was not named Brittany:

Jamie Lynn France, 23, was the stunning Miss Teen Oregon-World in 2009 but five years later she spends her days in a squalid drug dealer's bolt hole. She is one of three suspects police in Keizer, Oregon, have released shocking before and after photographs of to show the horrid effects of crystal meth. 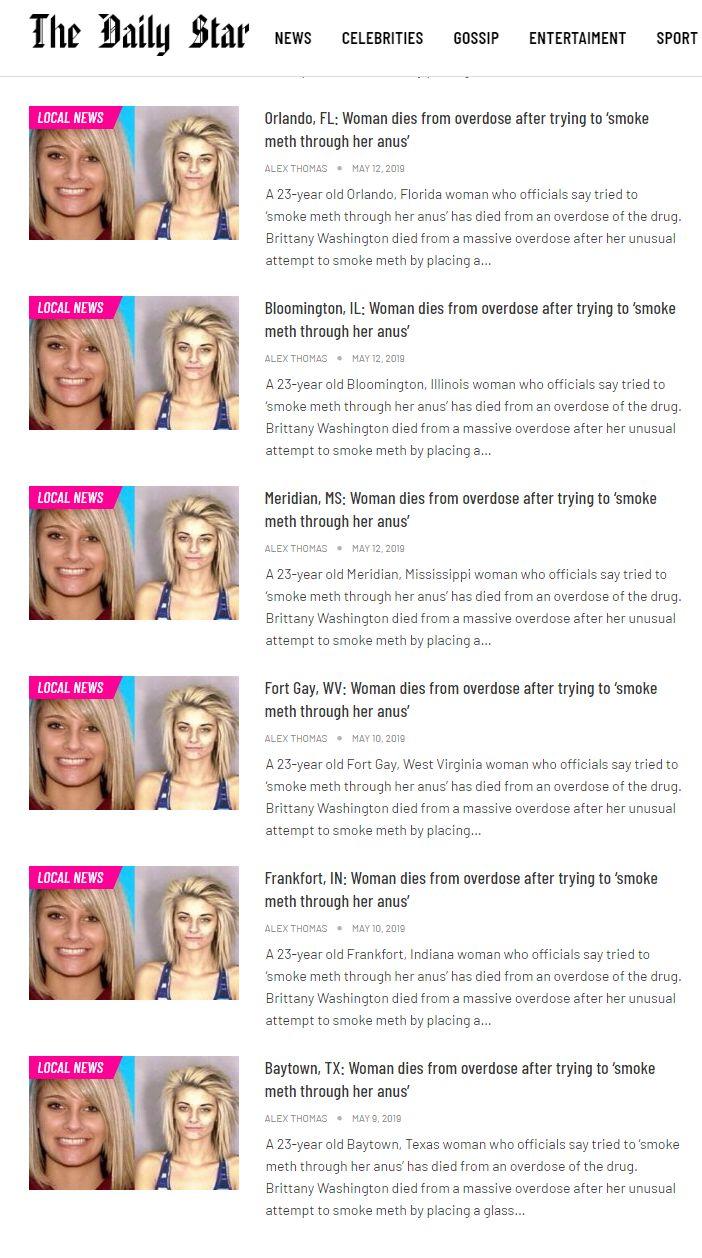 An entire network of fake news websites designed to look like local news outlets has vanished without a trace. Most likely it happened in the fall-out of a hoax from a month ago about a security guard at the Mandalay Bay hotel in Las Vegas supposedly being arrested as the "second shooter" after the mass shooting event on October 1st in which 58 people were killed.