Did Nany Pelosi send a letter to Iran saying that "Trump will be out by next year"? No, that's not true: The story was published by a liberal satire website that tries to educate gullible Trump supporters and Republicans about the need to actually click and read links before sharing or liking them in order to avoid being embarrassed by fans of the site later. All the events described in the article are not real.

The story originated from an article published by the satire site BustaTroll on June 23, 2019 titled "Pelosi Letter to Iran: 'Trump Will Be Out By Next Year.'" (archived here) which opened:

In a move that some critics are calling the "very height of disrespect", House Speaker Nancy Pelosi penned a letter Friday to President of Iran Achmahadajed Mahmalukah regarding President Trump's attitudes towards recent tense events, and made assurances that he would be : "out by next year." 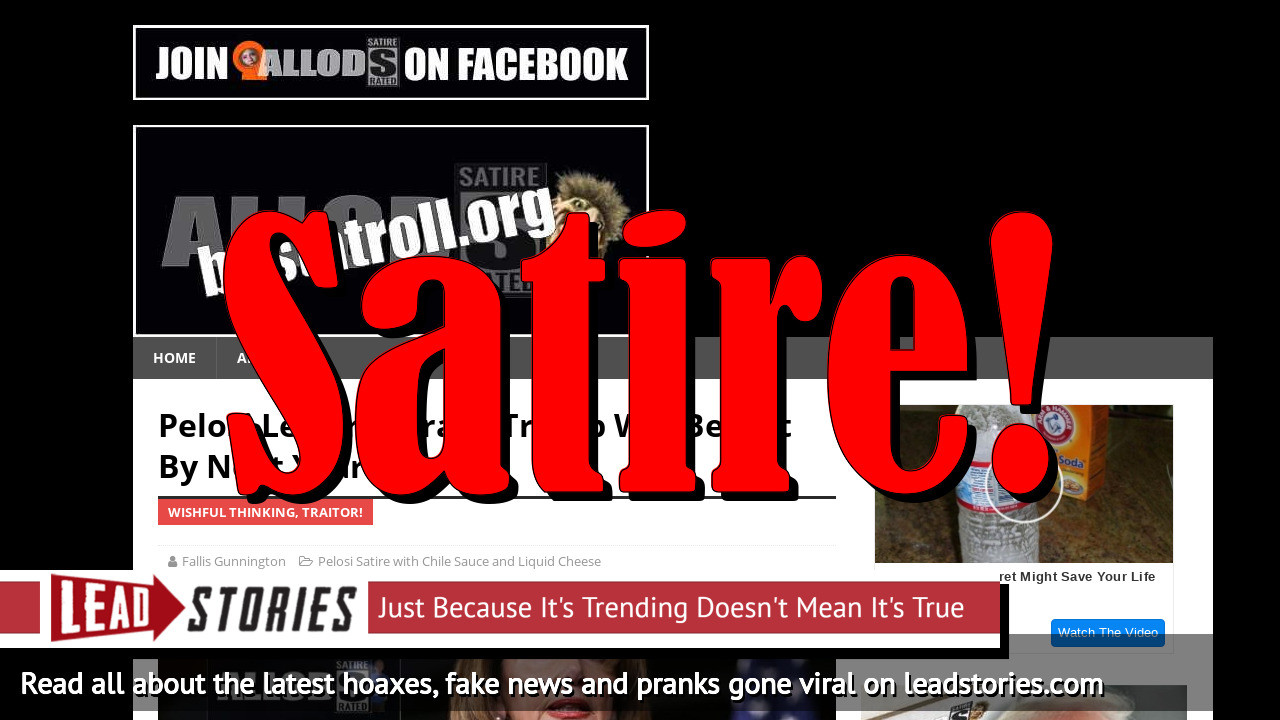 Pelosi Letter to Iran: 'Trump Will Be Out By Next Year.'

In a move that some critics are calling the "very height of disrespect", House Speaker Nancy Pelosi penned a letter Friday to President of Iran Achmahadajed Mahmalukah regarding Preside...

The letter, two pages long, and written on Hello Kitty stationary was delivered this morning by bicycle messenger to One.Tehran Palace, where His Supreme Mufta had it read to him by a servant as he smoked his breakfast hooka pipe and reviewed progress reports from Dearborn, Michigan. Moles within the palace say the Iranian President was pleased with Pelosi's letter, and immediately had it placed on his refrigerator door.

You may see a version of this story that Lead Stories marked as "false" and not "satire." That is because other sites steal the satire copy and republish it without the satire label. It is not unusual for social media users to then share it, thinking it is real.

The BustaTroll site is part of the "America's Last Line of Defense" network of satire websites run byself-professed liberal troll Christopher Blair from Maine and his partner in crime John Prager along with a loose confederation of friends and allies. Blair has been in a feud with fact checking website Snopes for some time now and has also criticized other fact checkers in the past who labeled his work "fake news" instead of satire. In reaction to this he has recently rebranded all his active websites and Facebook pages so they carry extremely visible disclaimers everywhere.

NewsGuard, a company that uses trained journalist to rank the reliability of websites, describes bustatroll.org as:

We wrote about bustatroll.org before, here are our most recent articles that mention the site: