Did Hillary Clinton claim Russians are "grooming" Rep. Tulsi Gabbard as a third-party presidential candidate in 2020? No, that's not true: Clinton suggested in a podcast that the Trump campaign -- not Russians -- was "grooming" a woman who was competing for the Democratic nomination to run an independent presidential campaign in 2020. Clinton said the potential third-party candidate being pushed by the Trump campaign is "the favorite of the Russians." While she did not name the woman, Clinton's spokesman later indicated to CNN that it was Rep. Gabbard. The spokesman also told CNN that Clinton was referring to Republicans, not Russians, as the groomers.

The story originated from an article (archived here) published by The National Review on October 18, 2019 under the title "Hillary Clinton Claims Russians 'Grooming' Tulsi Gabbard as Third-Party Candidate". It opened:

Former Secretary of State Hillary Clinton asserted that the Russians are attempting to undermine the 2020 election by backing Representative Tulsi Gabbard (D., Hawaii) as a third-party candidate, stating "she's the favorite of the Russians."

Appearing on Obama campaign manager David Plouffe's podcast, Clinton made a number of claims regarding Russian meddling in U.S. elections, including that Gabbard's substantial social-media support relies on Russian bots. Gabbard was the most-searched candidate after the first and second Democratic debates.

"I think they've got their eye on someone who's currently in the Democratic primary and are grooming her to be the third-party candidate," Clinton said on the podcast. "She's the favorite of the Russians. They have a bunch of sites and bots and other ways of supporting her so far." 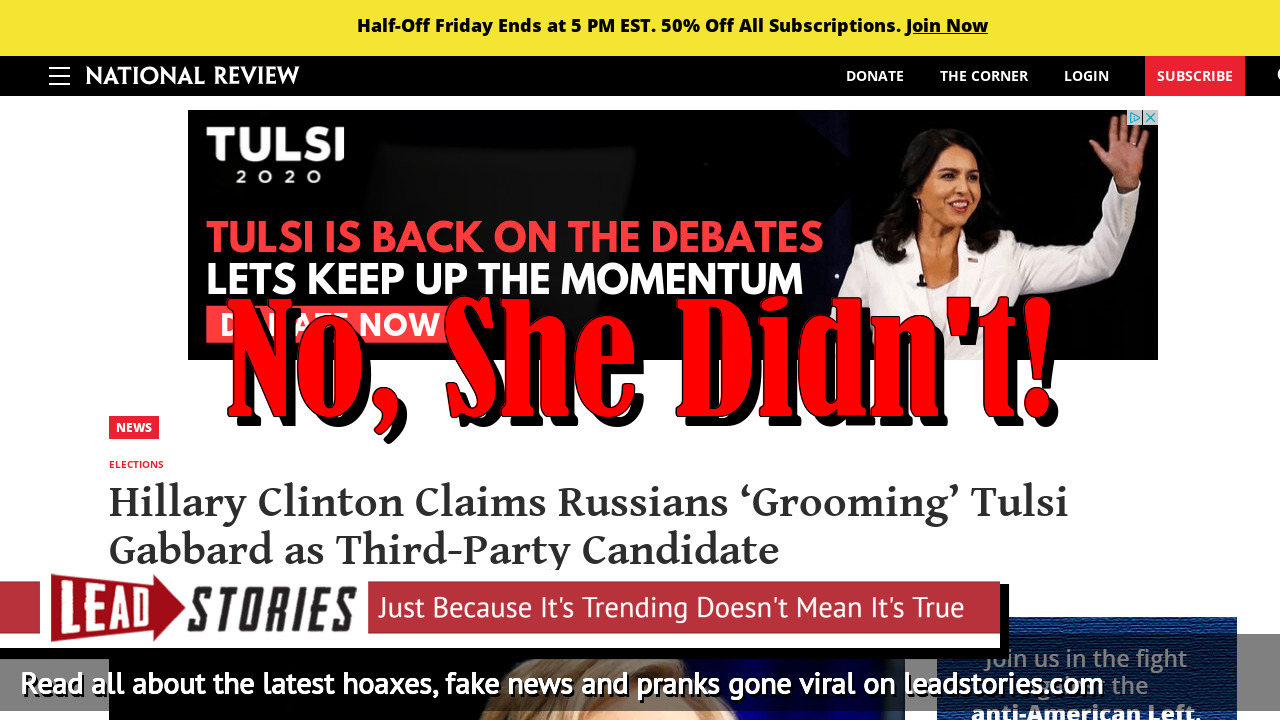 The National Review and other media outlets mades a mistake in conflating the Kremlin with the Trump Campaign. Clinton was speaking about the Trump campaign as "they" when she said "they" had a strategy of promoting an independent run by a candidate who could draw votes from the Democratic nominee in key states. She then suggested that the female candidate the Trump campaign was "grooming" is a "favorite of the Russians." She did not that the Russians were doing the grooming.

CNN initially quoted Clinton as saying the Russians were grooming Gabbard later issued a correction saying she was referencing Republicans. Clinton spokesman Nick Merrill told CNN that the former secretary of state was referring to Republicans, not Russians, as the groomers:

On Friday evening, after Clinton's comments drew considerable criticism from both Democrats and Republicans, Merrill backed away from the former secretary of state's allegation, tweeting, "She doesn't say the Russians are grooming anyone. It was a question about Republicans."

Folks, listen to the podcast. She doesn't say the Russians are grooming anyone. It was a question about Republicans.

Folks, listen to the podcast. She doesn't say the Russians are grooming anyone. It was a question about Republicans.
Cc:@VanJones68 https://t.co/xU7WAob0Ve

The National Review accurately reported what Clinton said about her suspicisions that 2016 Green Party nominee Jill Stein was a "Russian asset":

Clinton also labelled Green Party candidate Jill Stein a "Russian asset" and suggested on the podcast that Gabbard is playing a similar role in this election.

"They know they can't win without a third-party candidate . . . I will guarantee you they will have a vigorous third-party challenge in the key states that they most needed," Clinton declared.

In the aftermath of Donald Trump's election, the Clinton campaign followed Jill Stein's demands for a recount in Wisconsin, which ultimately gave Trump 131 more votes.

Read this transcript of the relevant section prepared by Lead Stories:

Plouffe: You know, Donald Trump, as you know better than anyone in the world, only got 46.1 percent of the vote nationally. You know he got 47.2 in Wisconsin, 47.7 in Michigan and if you had said those before the election you would have said he's gonna lose in a landslide.

Plouffe: But one of the reasons he was able to win is the third party vote.

Plouffe: And what's clear to me, you mentioned, you know, he's gonna just lie. I mean, you forgot what... He's gonna say, whoever our nominee is, "he'll ban hamburgers and steaks and you can't fly and infanticide" and people believe this. So, how concerned are you about that? For me, so much of this does come down to the win number. If he has to get 49 or even 49.5 in a bunch of...

Clinton: He can't do that.

Plouffe: ...which I don't think he can... So he's gonna try and drive the people not to vote for him but just to say, "you know, you can't vote for them either". And that seems to be, I think, to the extent that I can devine a strategy, their key strategy right now.

They're also gonna do third party again. And I'm not making any predictions but I think they've got their eye on somebody who is currently in the Democratic primary and are grooming her to be the third party candidate. She's the favourite of the Russians. They have a bunch of sites and bots and other ways of supporting her so far, and that's assuming Jill Stein will give it up. Which she might not, 'cause she's also a Russian asset.

And so, they know they can't win without a third party candidate and, so, I don't know who it's gonna be it but I will guarantee you they'll have a vigorous third party challenge in the key states that they most need it.

You can hear it for yourself, starting at about 35 minutes into the podcast "Campaign HQ with David Plouffe".

Asked earlier if the former secretary of state was referring to Gabbard in her comment, Merrill told CNN, If the 'nesting doll fits.'

Rep. Gabbard concluded she was the candidate Clinton was calling a Russian "favorite." In response, she tweeted:

Great! Thank you @HillaryClinton. You, the queen of warmongers, embodiment of corruption, and personification of the rot that has sickened the Democratic Party for so long, have finally come out from behind the curtain. From the day I announced my candidacy, there has been a ... concerted campaign to destroy my reputation. We wondered who was behind it and why. Now we know -- it was always you, through your proxies and ... powerful allies in the corporate media and war machine, afraid of the threat I pose.

It's now clear that this primary is between you and me. Don't cowardly hide behind your proxies. Join the race directly.

Great! Thank you @HillaryClinton. You, the queen of warmongers, embodiment of corruption, and personification of the rot that has sickened the Democratic Party for so long, have finally come out from behind the curtain. From the day I announced my candidacy, there has been a ...

NewsGuard, a company that uses trained journalist to rank the reliability of websites, describes nationalreview.com as:

The website for the National Review, a magazine founded in 1955 by intellectual William F. Buckley Jr. that produces serious, provocative reporting and commentary with an unabashed, consistently conservative point of view.

According to NewsGuard the site can generally be trusted to maintain journalistic standards. Read their full assessment here.

We wrote about nationalreview.com before, here are our most recent articles that mention the site:

: Updated 12:30pPT Oct 19, 2019 - adding Clinton spokesman tells CNN she was referring to Republicans, not Russians, as the groomers. 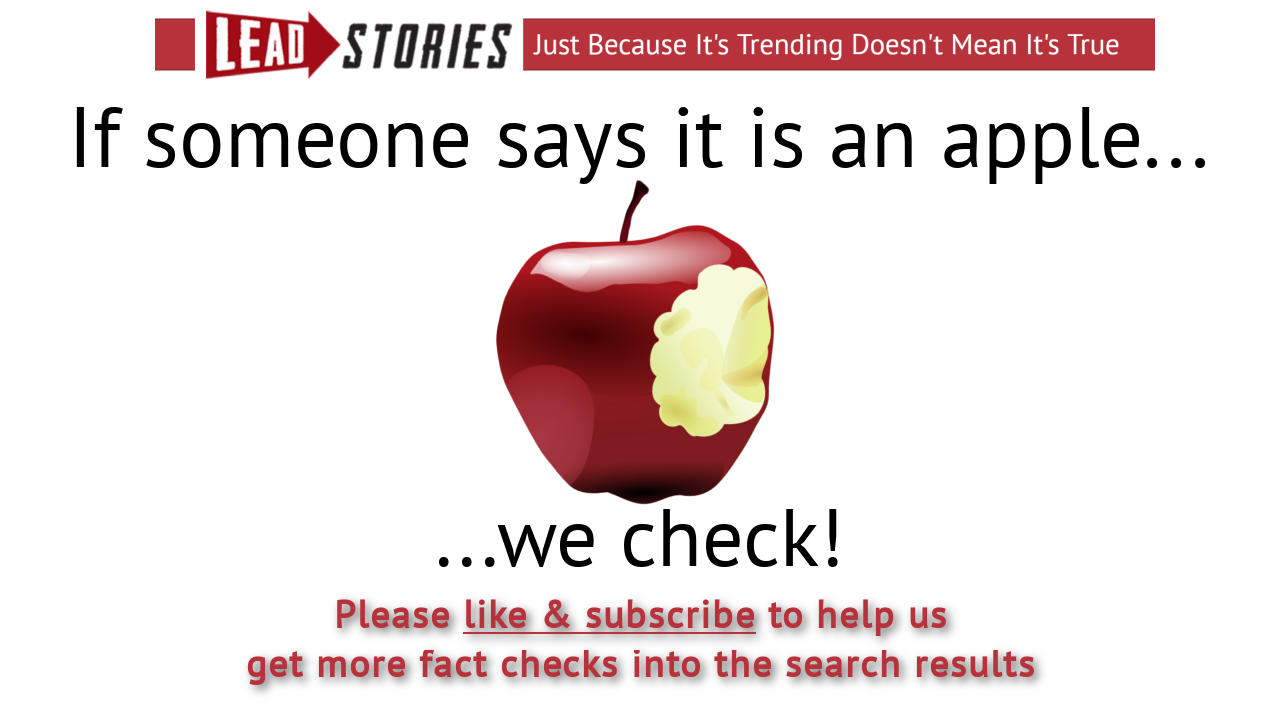