Could the U.S. Supreme Court overturn the "obstruction of justice" impeachment resolution against President Trump? No, that's not true: The U.S. constitution specifies that the House of Representatives has "the sole power of impeachment" and the Senate has the "sole power to try all impeachments." The Supreme Court has no role other than to send the chief justice to preside over a Senate trial. There is no appealing to the courts for the validity of charges in impeachment resolutions and no authority to "overturn" a charge. Although the president has suggested in a tweet that he might "go to the Supreme court" to stop what he called the "Impeachment Hoax," there is no constitutional basis for such a petition.

The claim originated from an article published by TheBL.com on December 14, 2019 titled "Supreme Court could overturn 'obstruction of justice' charges against Trump" (archived here) which opened:

After several weeks of threats, witnesses who had not witnessed the telephone conversation between Ukrainian President Zelenskiy and Trump, and several boring hearings, House Democrats passed two impeachment articles.

This Friday the House Judiciary Committee voted 23 to 17. Now, the indictment should be voted on next week by the full House of Representatives as part of the impeachment process and eventually pass to the Senate.

The two impeachment articles include these alleged crimes: 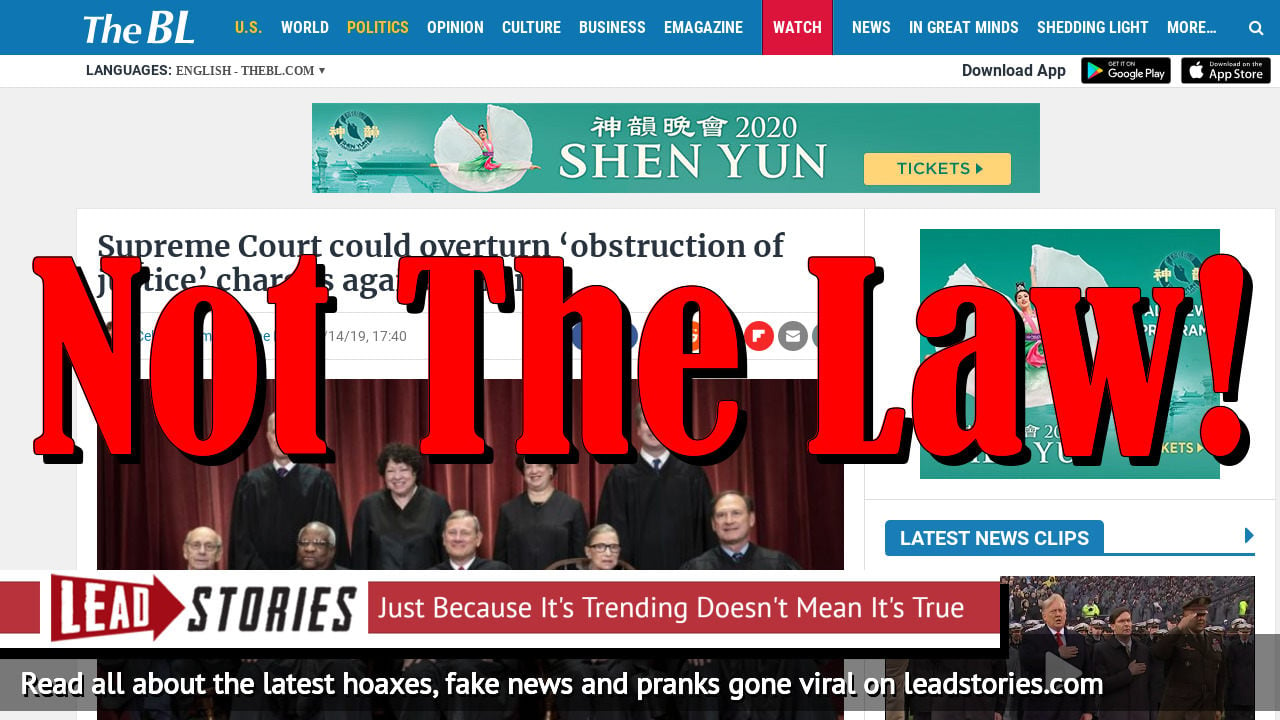 Supreme Court could overturn 'obstruction of justice' charges against Trump

After several weeks of threats, witnesses who had not witnessed the telephone conversation between U...

TheBL.com attributes the claim of a "twist" to a segment with Harvard law professor Alan Dershowitz on the FOX News show "Hannity," which you can watch in this video:

The key quote is when Dershowitz said:

Look, the most important development happened today. The Supreme Court of the United States absolutely pulled the rug out of part two of the impeachment referral by granting certiorari, by granting review in a case where Trump challenged a congressional subpoena! And the Supreme Court said we're going to hear this case.

Dershowitz, who has been rumored to be under consideration as one of Trump's impeachment defense lawyers, was referencing the high court's decision to consolidate three cases in which congressional committees and state investigators are seeking Trump's financial records. Although none of the cases are connected to the impeachment resolutions, Dershowitz was suggesting that the simple decision to hear arguments about Trump's claim to have blanket protection from subpoenas was evidence that Trump was right to defy subpoenas in the impeachment hearings. Even if the court rules in Trump's favor when a decision is handed down next summer, it would not have any impact on an impeachment trial expected in January 2020.

The precedent that the Supreme Court cannot review impeachments was last settled in a 1993 decision in which an impeached federal judge sought to have his ouster overturned. Chief Justice William Rehnquist wrote in the majority opinion that the framers of the constitution never considered giving the court jurisdiction over the process and specifically delegated the power to the House and Senate. If a president could appeal a conviction, the whole goverment could be thrown into uncertain turmoil:

This lack of finality would manifest itself most dramatically if the President were impeached. The legitimacy of any successor, and hence his effectiveness, would be impaired severely, not merely while the judicial process was running its course, but during any retrial that a differently constituted Senate might conduct if its first judgment of conviction were invalidated. Equally uncertain is the question of what relief a court may give other than simply setting aside the judgment of conviction.

Still, it may be a hope President Trump is holding onto, given his December 2, 2019, tweet:

Just landed in the United Kingdom, heading to London for NATO meetings tomorrow. Prior to landing I read the Republicans Report on the Impeachment Hoax. Great job! Radical Left has NO CASE. Read the Transcripts. Shouldn't even be allowed. Can we go to Supreme Court to stop?

Just landed in the United Kingdom, heading to London for NATO meetings tomorrow. Prior to landing I read the Republicans Report on the Impeachment Hoax. Great job! Radical Left has NO CASE. Read the Transcripts. Shouldn't even be allowed. Can we go to Supreme Court to stop?

NewsGuard, a company that uses trained journalist to rank the reliability of websites, describes thebl.com as:

A politics and culture site that advances an undisclosed agenda opposing the Chinese government and publishes paranormal conspiracy theories.

We wrote about thebl.com before, here are our most recent articles that mention the site: