Did Ruth Bader Ginsburg call the impeachment 'illegal BS?' No, that's not true: Ginsburg did not interview with the fake newspaper, The Washington Beguiler, and there is no record of her saying she called the impeachment proceedings "illegal BS."

The story was published by a liberal satire website that tries to mislead Trump supporters and Republicans into sharing made up stories that are clearly marked as satire when you actually click them. Articles from the site are frequently copied by foreign-run fake news websites. The people liking and sharing these stories are enriching foreign website operators or a liberal from Maine via the ad revenue generated with the content which is probably not what they expected or wanted.

Supreme Court Justice Ruth Bader Ginsberg has been a longtime opponent of President Trump and has called for his impeachment and removal many times. Throughout her recent illnesses she has vowed to stay on the bench "as long as it takes for Trump to be taken out of the White House."

So she should be happy about this week's decision to go ahead from the House, right? One would think so but statements she made today are surprising everyone and showing an impartiality that was not expected by anybody.

In an interview with DC newspaper, "The Washington Beguiler," Ginsberg was straightforward and honest about what she thought:

... 'I hate to say it but that whole impeachment was illegal BS. If a case like that ever appeared in my courtroom, I'd have thrown it out immediately and scolded the prosecution for wasting everyone's time. The Democrats should possibly face consequences for their meaningless disruption of government.'" 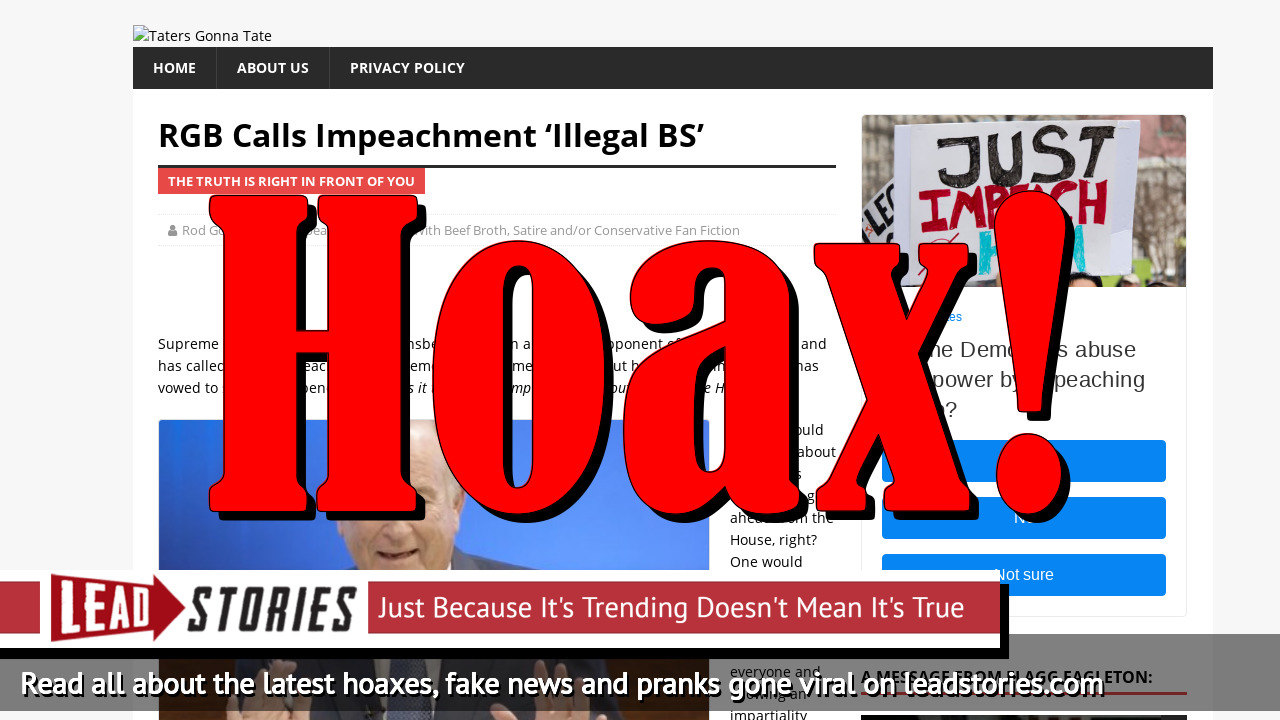 Supreme Court Justice Ruth Bader Ginsberg has been a longtime opponent of President Trump and has called for his impeachment and removal many times. Throughout her recent illnesses she has vowed to...

Ginsburg has been vocal about President Trump and the impeachment, saying he "is not a lawyer." Trump has floated the idea of appealing to the Supreme Court to stop impeachment trials on his Twitter, which Ginsburg suggested has no legal basis.

Ginsburg also added in the same interview with BBC's Razia Iqbal that, generally, trials should be impartial, and the proper job of a judge is to abstain from bias. According to the Constitution, during an impeachment trial of the president, the Senate takes an oath of impartiality in its role as jurors.

Trump has also formerly attacked Ginsburg on Twitter after she called him a "faker" during the 2016 presidential campaign. He repeatedly called for her resignation as an "incompetent judge." Ginsburg later apologized for her comments.

The site is part of the "America's Last Line of Defense" network of satire websites run byself-professed liberal troll Christopher Blair from Maine along with a loose confederation of friends and allies. Blair has been in a feud with fact checking website Snopes for some time now and has also criticized other fact checkers in the past who labeled his work "fake news" instead of satire. In reaction to this he has recently rebranded all his active websites and Facebook pages so they carry extremely visible disclaimers everywhere.

We wrote about tatersgonnatate.com before, here are our most recent articles that mention the site: