Did Colin Kaepernick lobby to remove the American national anthem from being played before professional football games? No, that's not true: The NFL quarterback, who is currently a free agent, made no such effort. The article is a work of satire that has been stolen by other websites without noting the satirical nature of the story.

The story originated from an article (archived here) published by BeBest.website on March 26, 2019, under the title "Kaepernick Lobbies to Remove the National Anthem from Football." It opened:

Ever since that rat traitor Colon Kaepernick first took a knee at an NFL game in San Francisco, he's been a thorn in the side of patriots from coast to coast. He claimed it was a protest over police brutality against minorities. A civil rights demonstration, he said. The nation wasn't fooled about his true reasons. True Americans knew that Kaepernick was spitting on our veterans, the flag, and the country as a whole each and every time he knelt through our glorious Star Spangled Banner. 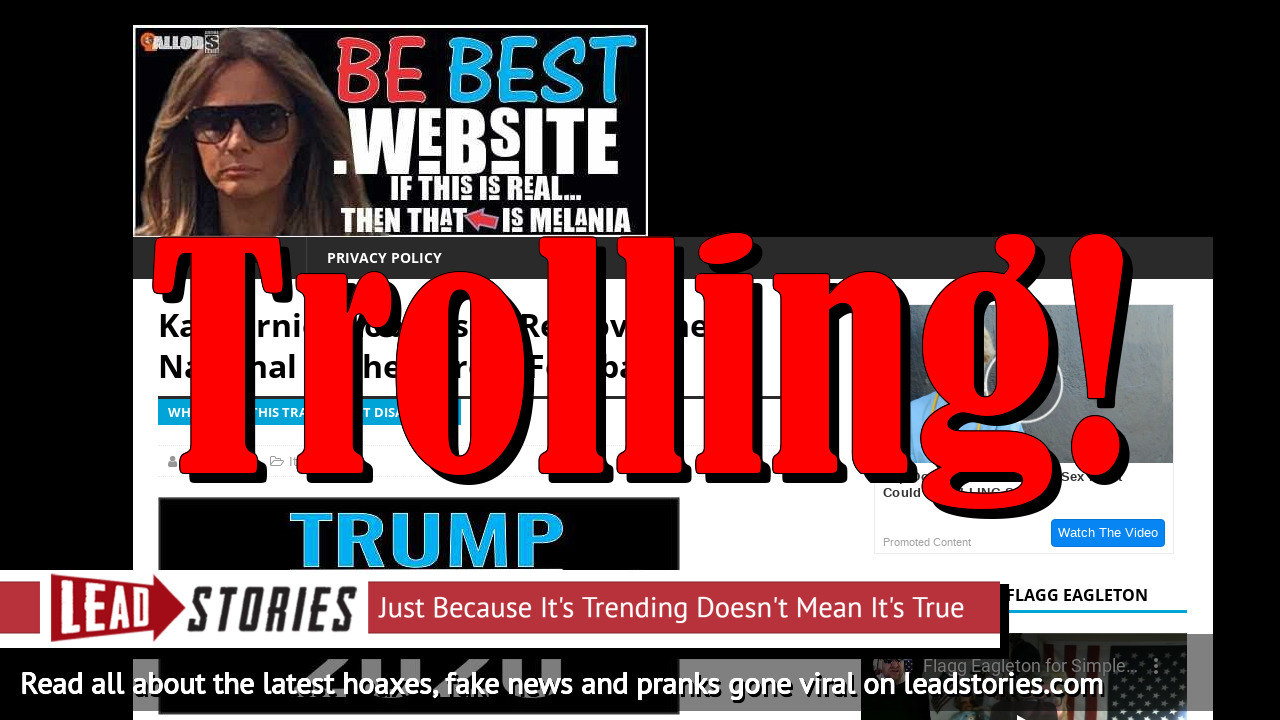 The story is untrue. Kaepernick has not advocated for the removal of the national anthem before NFL games. The former San Francisco 49ers quarterback made headlines in 2016 when he did not stand for the national anthem. Kaepernick said he was protesting police brutality against unarmed African Americans. His protests coincided with the rise of the Black Lives Matter movement.

A retired U.S. Army Green Beret Nate Boyer advised Kaepernick to kneel rather than sit out during the national anthem as a sign of respect, and he wrote the quarterback a letter. It said, in part:

I'm not judging you for standing up for what you believe in. It's your inalienable right. What you are doing takes a lot of courage, and I'd be lying if I said I knew what it was like to walk around in your shoes. I've never had to deal with prejudice because of the color of my skin, and for me to say I can relate to what you've gone through is as ignorant as someone who's never been in a combat zone telling me they understand what it's like to go to war."

Shortly thereafter, other players joined in the protest. About 200 players took a knee or sat during the national anthem. The issue became a national talking point about race and police brutality.

During his 2016 presidential campaign, Donald Trump said that Kaepernick should live somewhere else:

I have followed it and I think it's personally not a good thing. I think it's a terrible thing, and you know, maybe he should find a country that works better for him, let him try, it's not gonna happen."

Trump went on to speak out against Kaepernick's decision and conservatives began calling for a boycott of the NFL. Trump, at one point, even called for NFL players who didn't stand for the anthem to be fired.

Even though the controversy about Kaepernick's protest has died down, he remains a lightning rod for those who believe his free speech act was unpatriotic.

The BeBest.website site comes with a clear satire disclaimer at the top of each article:

The owner and main writer of the site is self-professed liberal troll Christopher Blair, who lives in Maine. He has made it his full-time job to troll gullible conservatives and Trump supporters into liking and sharing his articles. He runs several other websites, including wearethellod.com, bustatroll.org or bebest.website. Sometimes, he is also known under his nickname "Busta Troll."

Articles from Blair's sites frequently get copied by "real" fake news sites that often omit the satire disclaimer and any other hints the stories are fake. Blair has tried to get these sites shut down, but new ones keep cropping up.

Blair and his operation were profiled by the Washington Post on November 17, 2018, by Eli Saslow:

NewsGuard, a company that uses trained journalists to rank the reliability of websites, describes BeBest.website as:

We wrote about bebest.website before. Here are our most recent articles that mention the site: